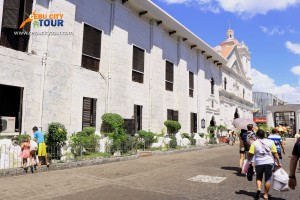 The Basilica Minore Del Sto. Nino (The Minor Basilica of the Holy Child in English) is a minor basilica located in Cebu City, Philippines. It was founded by the Spaniards headed by Fr. Andres de Urdaneta on April 28, 1565. It was also the same day that the Legazpi-Urdaneta expedition arrived in the island of Cebu.

Basilica Minore Del Sto. Nino is the oldest Roman Catholic church established in the Philippines. It was built on the same spot where the image of the Sto. Nino de Cebu, a statue depicting the Child Jesus, was found in 1565 by Spanish explorers led by Miguel Lopez de Legazpi. The image is the same statue given by Ferdinand Magellan to the wife of Rajah Humabon as a gift over forty years after Humabon’s baptism to Christianity. he was baptized on April 14, 1521. The image was found by a soldier. It was preserved in a burnt wood box after Legazpi razed the village of hostile natives. The Holy See calls the temple the “Mother and Head of all Churches in the Philippines”.

The present building of the Sto. Nino church, which was completed in 1739-1740, has housed the oldest religious image in the country ever since.

1566 – the first church believed to be built on the site where the image of the Sto. Nino was found was destroyed by fire and was said to be built by Fr. Diego de Herrera using wood and nipa.
1605 – the construction of a new church made from wood and nipa was started headed by Fr. Pedro Torres. It was finished in 1626. Unfortunately, because of the lightness of the materials used, it was again burned in 1628.
1628 – the construction of another church was started again as directed by Fr. Juan Medina. This time, they used stones and bricks instead. The structure was found to be defective because the bricks professedly “melted” upon contact with air so the construction was stopped.
February 29, 1735 – During this time, the construction was started with a combination of efforts from Father Provincial Bergano, Governor-General Fernando Valdes, Bishop Manuel Antonio Decio Y Ocampo of Cebu and Juan de Albarran Prior of the Sto. Nino. They started the foundation of the present church using stones. Aside from the efforts of the names mentioned, a lot of help came from other church leaders and parishioners. 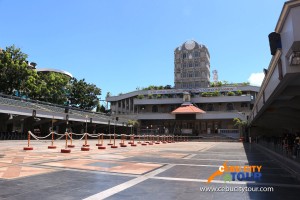 
The Basilica Complex of Basilica Minore del Sto. Nino is located in city block bordered by the Osmena Boulevard, D. Jakosalem Street, P. Burgos Street, and the Plaza Sugbo where the Magellan’s Cross is located. The main entrance is on the Osmena Boulevard. Two blocks at the north of the basilica is the Cebu Metropolitan Cathedral. It is where the Roman Catholic Archdiocese of Cebu seats. 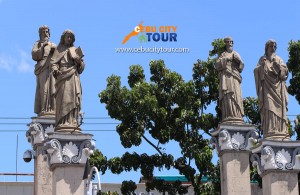 
Every 3rd Sunday of January, the whole Cebu City celebrates the grandest celebration of the year. It is the Sinulog festival. It is a celebration in honor of the feast of the Senior Sto. Nino, the patron of Cebu. One of the highlights of this celebration is the street parade that lasts for 9 to 12 hours with participants coming from the different towns and cities of Cebu and even from other islands of the Philippines. 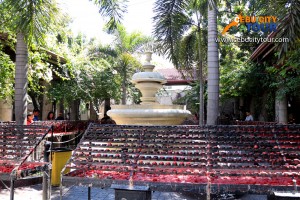