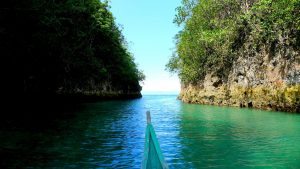 The south of Cebu has long been known for great and awesome sceneries. From scenic beaches, rich marine life, breathtaking waterfalls, adrenaline-rising adventures, magnificent vintage churches, and other unique sites.

One of the most unique adventures to have in South Cebu is the Bojo River Cruise. It is an adventure that is totally different from the rest.

Bojo River is located in Barangay Bojo in the municipality of Aloguinsan. It is about 1.4 kilometers from the starting point to the inlet intersecting the sea. The name “Bojo” was derived from a Spanish word that means “river ceiling”. In the Cebuano dialect, Bojo is pronounced as “bo-ho” which locally means “hole” or an “inlet” most specifically the inlet at the end of the river joining the sea. The inlet was believed to be a place of refuge for the people of old during bad weather and a hiding place for Cebuano warriors from Spanish and Japanese colonizers.

The water in the river is saline, a mixture of fresh and saltwater. There are minerals under the river that gives the greenish color of the water. Greenish as it may be, the water is 100% guaranteed to be clean and safe.

There are numerous mangroves growing in the river. There are about 22 species of mangroves growing in the area. They serve as wave barriers and home to fish eggs that are nursing under their roots before they are mature enough to go to the sea. The leaves of the mangroves, when they fall out, serve as food for the crabs. The decayed ones give off nutrients to phytoplanktons, the food for baby fishes.

Aside from mangroves, the river is also a home to numerous species of birds (71 species). There are 10 species which are migratory and can only be seen at dawn and dusk.

The local government of Aloguinsan has made an initiative to create Bojo Aloguinsan Ecotourism Association (BAETAS) with an aim to preserve the river and its wildlife. Another purpose of the association is to provide an alternative source of income for the locals and the community. The BAETAS started in 2009 and had gathered locals to be trained to run their ecotourism project. Most of the members of the said project are housewives, fishermen, and farmers that are yearning to earn additional income to help sustain their families. Some have not even finished their studies but because of the training that they had undergone, they are more capacitated to run the project.

What to Expect During the Bojo River Cruise

The tour will begin with an orientation about a brief history of the river and the do’s and don’ts during the whole duration of the cruise. It is very important to abide by the rules before, during, and even after the tour to help in the preservation of nature.

After the orientation, life vests will be provided and guests will be boarded to small boats. There are trained tour guides who will be at the cruise and they will explain informative facts about the river. The whole cruise will take around 45 minutes of relaxing boat ride.

At the boundary of the river and the sea, the current is quite strong so it is advisable to be cautious and follow what the tour guides will say. Amazing corals can be seen underwater and those who are courageous enough can take a dip in the waters to witness the underwater treasures.

Guests who did not avail the packaged tour can only enjoy the river cruise. Packaged tours include a thorough lecture about mangroves, ecology, and wildlife; a conventional send off ritual performed by a village “mananambal” (a faith healer) to drive away bad omens; a buffet lunch; a river cruise; and a mat weaving demonstration.