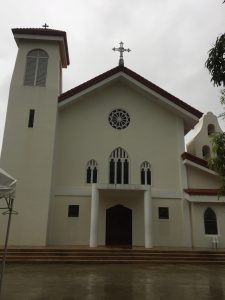 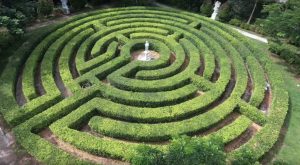 Toledo City, previously called as “Pueblo Hinulawan”, is a city located in the west of Cebu Island. It is extensively known for its vast mining industry owned by Atlas Consolidated Mining and Development Corporation.

Aside from mining, Toledo is now starting to be recognized through its recently discovered tourist spots. One of which is the Capilla Santa Ana Museum and Community Center and the Labyrinth that can be found beside the chapel.

The Capilla Santa Ana Museum is a privately owned chapel located in Sitio Santa Ana, Barangay Ibo, Toledo City. It is owned by a Toledo native, Lilian Yareda, who is married to Michael Overs, a Canadian. The chapel was designed very identical to the old chapels in Europe.

There are five rooms inside the chapel which serve as prayer room, baptistry, museum, and a classroom. The chapel also serves as a multi-purpose building for Tesari Charitable Foundation where they conduct health, educational, and livelihood assistance to the registered voters of the city.

The interior of the chapel is beautifully embellished with European Renaissance paintings, antiques, and sculptures. There is even a replica of one of Michelangelo’s finest masterpieces, the Pietà. It is also filled with religious icons displayed in every corner. An 1859 Steinway piano is also displayed inside.

Beside the chapel, a garden called the Labyrinth can be found. It is inspired by the labyrinths found in Europe. It is a maze-like creation that is perfect for picture taking.