About the Casa Gorordo Museum

The Casa Gorordo Museum was built by Alejandro Reynes y Rosales in the 19th century. It was originally a two-storey house. In 1863, it was bought by a Spanish merchant, Juan Isidro de Gorordo. Between 1863 to 1979, four generations of the Gorordo family lived in this house, one is the very first Cebuano bishop, Juan Gorordo.

The house was built with coral stone blocks, terra-cotta roof tiles, and molave (tugas) hardwood flooring. It also has wide windows with sliding panels that are fitted with capiz shells, a typical Spanish architecture during the Spanish colonial period. It is known locally as the “bahay na bato”.

In 1980, the house was purchased by the Ramon Aboitiz Foundation, Inc. under its Cultural Heritage Program. It was then opened as a public museum in 1983 after comprehensive renovation and restoration. The National Historical Institute declared the house as a National Historical Landmark in September 1991. The museum now exhibits Philippine culture and lifestyle of the mid-19th and early 20th century. 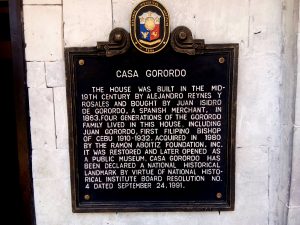 What Can be Seen Inside the Museum?

Inside the museum are ornamented antique furniture, costumes, paintings, and religious images like life-sized and small statues of saints and other figurines. There are also wood carvings, decorative arts and household items, and tools for farming, kitchen and even baking. It also showcases present-day arts on the ground floor.

The ground floor has a patio and a small gallery.The patio serves a waiting room for the guests. The basement is near the patio and is used for food storage.

Various artifacts from the 18th and 19th century can also be found like implements for agricultural and household use. They have plows and other soil cultivating tools that are evidences that farming already existed in Cebu during the Spanish era.

Instruments for washing clothes are also displayed like large water basins made of hardwood, clothes wringers, dryers, and wooden iron for ironing clothes. 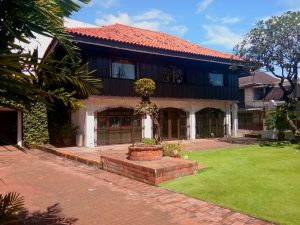 At the second floor, there are original figures that shows intricate art like wood carvings. These divide the house into function rooms.

There are rattan sets and Vienna chairs in the living room with cabinets, tables, and beds that are manufactured from hardwood like narra and molave. These furnitures also have exquisite carvings.

The dining room has antique silverware, plates, and cups. It also has 18th century water jars and cooking accessories.

The Casa Gorordo Museum is located at No. 35 Lopez Jaena Street, Barangay Parian, Cebu City. It is open to the public on Tuesdays until Sundays from 10:00 a.m. to 6:00 p.m and is closed on Mondays and holidays.