The Cebu Provincial Capitol Building was built during the American occupation in 1937 during the term of Governor Sotero Cabahug. It was designed by Architect Juan Marcos Arellano, a famous Filipino architect who also designed other famous buildings like Manila Metropolitan Theatre, National Museum of the Philippines, and Manila Central Post Office Building. It was commemorated on June 14, 1838 by Philippine Commonwealth President Manuel L. Quezon. 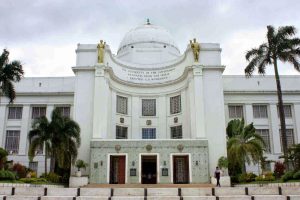 The Capitol building is considered as one of the oldest and most attractive structures in the whole country. It is declared as a National Historical Landmark because of its part in the history of Cebu as well as the country. During World War II, the building sustained some damages but was immediately repaired after the war has ended.

At the front facade of the building, a proverb of democracy that states “The Authority of the Government Emanates from the People” is boldly written on the concave at the upper part of the building.