The Heritage of Cebu Monument

About the Heritage of Cebu Monument 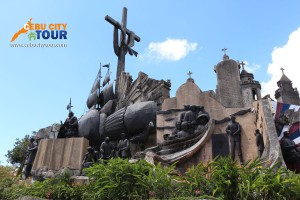 The Heritage of Cebu Monument is a representation and illustration of sculptures depicting significant and symbolic events in the history of Cebu back from the time of Rajah Humabon to the recent beatification of the Cebuano martyr, Pedro Calungsod.

The monument was built by the local artist, Eduardo Castrillo. Its construction started in July 1997. He and the late Senator Marcelo Fernan funded the construction together with other donations from private individuals and organizations. The construction was finished and inaugurated on December 8, 2000.

The scenes illustrated in the monument are the conversion of Rajah Humabon and his followers to Christianity, the local revolution against the Spanish rule, a Roman Catholic Mass, and the fateful fight on April 21, 1521 in the island of Mactan where native chieftain Lapu-Lapu killed Ferdinand Magellan. The structures carved in the monument includes the Basilica Del Sto. Nino, Cebu Metropolitan Cathedral, The Saint John the Baptist Church, Magellan’s Cross, a Spanish Galleon, Statues of Sergio Osmena Sr. and Blessed Pedro Calungsod. 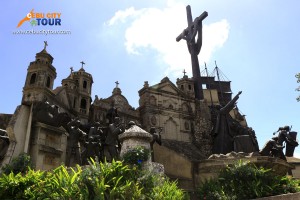 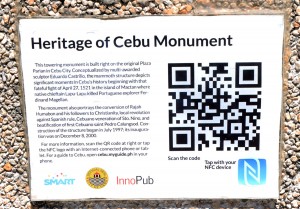 The spot where the monument stands now, the Parian, is very historical. It used to be a home to the residences of the most prominent families in Cebu during the Spanish Period. It also used to be the center of trade between the locals, the Chinese and Spanish mestizos. The word “parian” was derived from the word “pari-pari” meaning to barter or trade. It was also where the wealthy Chinese merchants held lavish events. It is also where the St. John the Baptist church formerly stood but was demolished in 1875 by the diocese of Cebu.

According to the published information about this Monument, it was built on the original Plaza Parian in Cebu City. Conceptualized by Eduardo Castrillo, the monument depicts Cebu’s History beginning with the fateful fight in April 27, 1521 in the Island of Mactan where native chieftain Lapu-Lapu killed Ferdinand Magellan.

How to Get There


The Heritage of Cebu Monument is very accessible whether through public utility jeepneys, taxis, or a private car. It is located just a short walk from Colon Street and 15-20 minutes taxi ride from Ayala or SM. It is very easy to find as taxi and jeepney drivers are very familiar to the place.