Cebu is known to have the best tasting lechon in the whole country. It is considered as the “Lechon Capital of the Philippines”. There are numerous stores that sells great tasting lechon but above all, Rico’s lechon stands out from the rest.

Founded by Mr. Enrico “Rico” Dionson who started as a bet taker in a cockfight arena since he was a teenager. Knowing that his income wasn’t enough to support his family, he then decided to shift to lechon business. He started by giving samples of his lechon and business cards to his friends and prospective clients.

His road to success was not easy. Like other success stories, his has its own ups and downs too. His very first venture gained a negative comment, his lechon was too salty. But that failure never stopped him from trying. Instead, he was challenged even more to master his trade so his product will be the best tasting lechon and would compete from the others who are already in the industry.

Its success commenced when former president of the Philippines, Joseph Ejercito Estrada, discovered the best-tasting roasted pig. He conducted a taste test and Rico’s Lechon was among the three to undergo the test and Rico’s Lechon stood out the most. Suddenly, the business then took off. They then experimented a new variety of lechon which is the spicy one which easily captured the taste buds of their customers making them the very first one to introduce the spicy flavored lechon.

Presently, Rico’s Lechon sells around 2,000 to 4,000 pieces of lechon every month. They have customers all over the country including famous people in politics and show businesses. With their outlets in Cebu, they serve not just the best tasting Cebu. They also serve a variety of food selection like Bicol Express, Kinilaw, Calamares, Camaron Rebosado, Sinigang, Pinakbet, Chopsuey, Ngohiong, and many more.

Ricos lechon prices vary with the size that you would want to order. 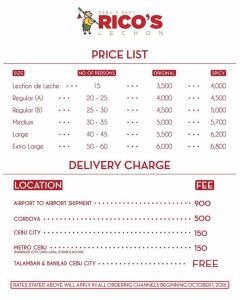 Rico’s Lechon has a number of branches and outlets in Cebu. Here is a list of them:

For best tasting lechon, Rico’s Lechon is the perfect place to dine. Its branches are located very strategically so visitors, both foreign and local, will have an easy access. Aside from that, they have also established an online ordering system that will cater their ever loyal customers outside Cebu.